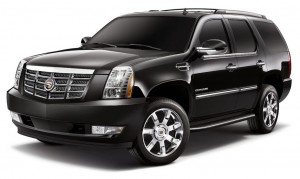 The 2011 Cadillac Escalade is available now from Jim Hudson Cadillac in Columbia, SC

Jim Hudson Cadillac, the exclusive Cadillac dealer in Columbia, is thrilled to announce the arrival of the 2011 Cadillac Escalade lineup of luxury SUVs.  The Cadillac Escalade continues to offer discerning Columbia SUV shoppers the most complete model lineup in its segment, with three distinct body styles and the Escalade Platinum models. The standard Cadillac Escalade in Columbia SC is complemented by the extended length ESV model and the innovative EXT model that features a reconfigurable cargo bed with a segment-exclusive midgate that allows the driver to convert the second row of seating to extended cargo space.

Escalade Platinum is the highest expression of Cadillac’s dramatic design, luxury and technology. With features including segment-first LED headlamps, exclusive chrome 22-inch wheels, custom interior features, and the world’s fastest-acting suspension, Magnetic Ride Control, it’s one of the most technically advanced vehicles in the segment.

The 2011 Cadillac Escalade lineup offers Columbia drivers integrated powertrain, chassis, safety and interior systems that deliver some of the most powerful, efficient luxury SUVs in the segment, led by a 6.2L all-aluminum V-8 engine with variable valve timing technology delivering 403 horsepower and 417 lb.-ft. of torque. The 6.2L engine is also a FlexFuel engine and can run on renewable E85 ethanol in addition to regular gasoline.

A roster of advanced features reinforces Escalade’s position as technology leader, designed to bolster comfort, convenience and safety. They include:

Magnetic Ride Control gives the Escalade Platinum more precise body motion control while traveling along the roads and highways of Columbia. It is a real-time damping system – “reading” the road in millisecond intervals and changes damping in 5 milliseconds. It replaces the mechanical-valve shocks found in most vehicles with electronically controlled shocks filled with a magneto-rheological fluid containing very small particles of iron. Under the presence of magnetic charge, the iron particles align to provide the exact amount of desired damping resistance in a fraction of a second.

Handcrafted luxury details abound inside the Escalade Platinum. The instrument panel, center storage console and door trim are wrapped in leather. They feature decorative French seams that convey an elegantly tailored look and feel. Materials include rich leather on the instrument panel, with unique wood inlays and aluminum trim.

Tehama aniline leather is unique to the Escalade Platinum and is used to fully trim the first- and second-row seats. Contrasting-color stitching is used on the French seams for a distinctive, luxurious appearance and the seatbacks are embroidered with the signature Cadillac wreath and crest insignia. The leather-covered seats are comfortable and convenient, with the industry-exclusive power fold-and-tumble second-row seat feature that eases access to the third-row seat with just the press of a button.

Additional standard interior features include Platinum-specific door sills and floor mats; a heated leather-wrapped steering wheel; and heated and cooled cupholders and a power liftgate that opens and closes with the touch of a button. Also, the DVD entertainment system adds screens integrated into each front-seat headrest, in addition to the existing roof-mounted screen.

Each front-row headrest screen has its own driver and input controls. The headrest units can be operated independently or in tandem. This system enables passengers in different seats to watch or listen to different entertainment choices. Escalade Platinum models include the acclaimed ten-speaker Bose 5.1 Digital Surround system, as well as the eight-inch touch screen for Navigation, DVD, CD, MP3 and XM Satellite Radio entertainment.

The Cadillac Escalade ESV for sale in Columbia SC is the largest member of the Escalade lineup, offering maximum passenger accommodations and cargo capacity. Combining power, size and strength with trademark Cadillac styling and technology, the full-size Escalade ESV has strongly positioned Cadillac in the large luxury SUV market.

The vehicle is 21 inches (53.4 cm) longer than Escalade, translating into more premium seating and cargo-carrying capability – up to 137.4 cubic feet (3,891 L) behind the first row, with the second folded and third row removed. It features all the same elements and features, both standard and available, as the standard Escalade, but adds an additional eight-inch flip-down screen for third-row passengers to the rear-seat entertainment system.

The Cadillac Escalade EXT in Columbia SC brings unmatched versatility to the Escalade family of luxury SUVs, blending the functionality of a pickup truck into a thoroughly luxurious Escalade to create a compelling package for Columbia luxury SUV shoppers.

The EXT model is a unique Sport Utility Truck (SUT) body style, giving it a part-SUV, part-pickup profile. With the industry-exclusive Midgate panel, owners can easily convert the EXT from a five-passenger SUV into a two-passenger pickup with eight feet of protected and secured storage. The midgate, located behind the rear seat, can be folded into the cabin, enabling the cargo area to expand from five feet to eight feet, for a total of 101 cubic feet in secured volume. A standard tonneau cover locks in place to protect items in the cargo bed, or the three-section cover can be removed entirely for added space.

All 2011 Cadillac Escalade models for sale in South Carolina are now equipped with ninth-generation OnStar technology. The flexible speech recognition system is now smart enough to interpret different sentences/phrases without actually hearing the exact 2-3 word commands from the user. For example, if a subscriber wants to place a call using the Hands Free Calling System, if they simply say, “I would like to make a phone call” or “Need to make a phone call,” instead of saying the exact “dial” or “call” command, the system will understand that the user wants to place a call and process that command accordingly. The system is capable of recognizing thousands of sentences that users may say.

Additionally, significant improvements have been made to the flexible speech recognition system to allow it to better understand the many regional dialects that subscribers may have. This means that a subscriber in Southern Louisiana will be just as easily understood by the OnStar system as a subscriber in Long Island or Minnesota, no matter how thick his or her accent may be. OnStar engineers in North America and China perform extensive validation testing across four languages (English, French, Spanish and Mandarin), more than thirty different dialects and vehicles models in a wide range of driving and noise conditions.

Jim Hudson Cadillac is the exclusive Columbia Cadillac dealer in South Carolina, a franchise awarded after 30 years of superior customer service to the area’s Oldsmobile, Buick, GMC, and Pontiac drivers.  Columbia car shoppers have voted Jim Hudson Best New Car Dealership in Columbia an unmatched ten years running, a testament to Jim Hudson’s commitment to complete customer satisfaction.  Jim Hudson Cadillac is located at 7201 Garners Ferry Road in Columbia, and can be reached by phone at (803) 783-0110.